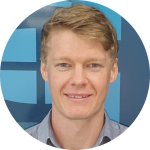 Jesse started with Online in a casual role in October 2009, and worked on and off until he completed his Bachelor of Commerce Degree in Accounting in 2012.  At the end of 2012 he went to Auckland to help out with the summer season for one of our major clients.

In January 2013 Jesse joined our Trainee Manager Programme, based at Freight Place in Auckland. He was promoted to 2IC in March 2013 and then Manager in June 2014. As a Manager, his role included running one of our biggest warehouses over the summer season, coaching new staff and creating efficiencies in our Freight Place operation. Further promotion followed, and Jesse is now the Operations Manager for our Northern Region.

Since joining Online, Jesse has not only gained knowledge and experience in warehousing, but also business in general and says “I enjoy applying what I have learned from my studies into a proper business setting”.

Initially I didn’t know much at all. I was aware of Online as a company but had no idea exactly what the company did.

Very well. I was fortunate enough to walk into a job which can provide significant opportunity for career progression. This is something which is surprisingly hard to do for many graduates.

Progressing as far as I have in such a short amount of time.

I enjoy a number of things about working here. I enjoy the fast-paced nature of the business as I’m constantly faced with a number of new challenges. Also I enjoy having the opportunity to work closely with such a variety of clients, companies and people.